SNOW CLEARING FROM STREETS AND SNOW RIDGE FROM PRIVATE DRIVEWAYS

ORIGINALLY APPROVED BY RESOLUTION OF COUNCIL ON:  DECEMBER 10, 1986
MOST RECENTLY AMENDED BY RESOLUTION OF COUNCIL ON:  OCTOBER 19, 2022
BACKGROUND / INTENT:
The Town of Stonewall undertakes the clearing of snow from Town streets and sidewalks to enable vehicle and pedestrian travel for residents, ratepayers and other users of Town streets and sidewalks during the winter months. It is the general intent of this Policy to outline the practice for the clearing and removal of snow from Town streets and sidewalks.
POLICY/PROCEDURES:
1.  For the purpose of this Policy snow "accumulation” shall mean either snowfall or snow drifting or both. Snow accumulation is the mean depth of snow on the street or sidewalk and may have been accumulated by a single snowfall or snow drifting event or may be a result of a number of snowfall and/or snow drifting events.
2.  Accumulation amounts for snow clearing will be at the discretion of the Operations Manager or Appointed Officer of the Town of Stonewall.
3.  For the purpose of this Policy Major Roadways shall be identified by the Operations Manager or Appointed Officer (see Appendix A to Schedule “A”)
4.  For the purpose of the Policy streets shall be categorized into zones by the Operations Manager or Appointed Officer (see Appendix B to Schedule “A”).
5.  Preference for snow clearing will consist first of all roadways. When clearing snow from any street results in the placement / deposit of a snow ridge in a private driveway entrance onto the said street which is 30 cm or higher the Town shall clear the snow ridge from driveway entrances after major roadways, sidewalks and emergency service areas have been cleared.
6.  The Town of Stonewall will only remove the snow deposited at the time of snow clearing. Failure to clear snow from previous snowfalls could result in a ridge or ledge that will not be cleared by Town staff. The Town will not enter anyone’s driveway to remove snow. Removal will only occur on the Town property line (Right of Way) near the boulevard or curb.
7.  Any damage incurred from clearing of snow by the Town of Stonewall on decorative driveways, curbing, planters, landscape features, basketball hoops, Christmas decorations, or any obstacles or obstructions placed/left by property owners on boulevards will not result in any liability to the Town.
8.  The process / method for snow removal within the Town of Stonewall shall be as provided in Schedule "A" to Policy No. 8.1 attached hereto.

Snow clearing in the Town of Stonewall will be conducted as follows:

Major Roadways as identified in Appendix A are cleared first. These streets include the major routes, accesses, and streets with emergency services.  The Fire Hall parking lot will also be cleared at this time. 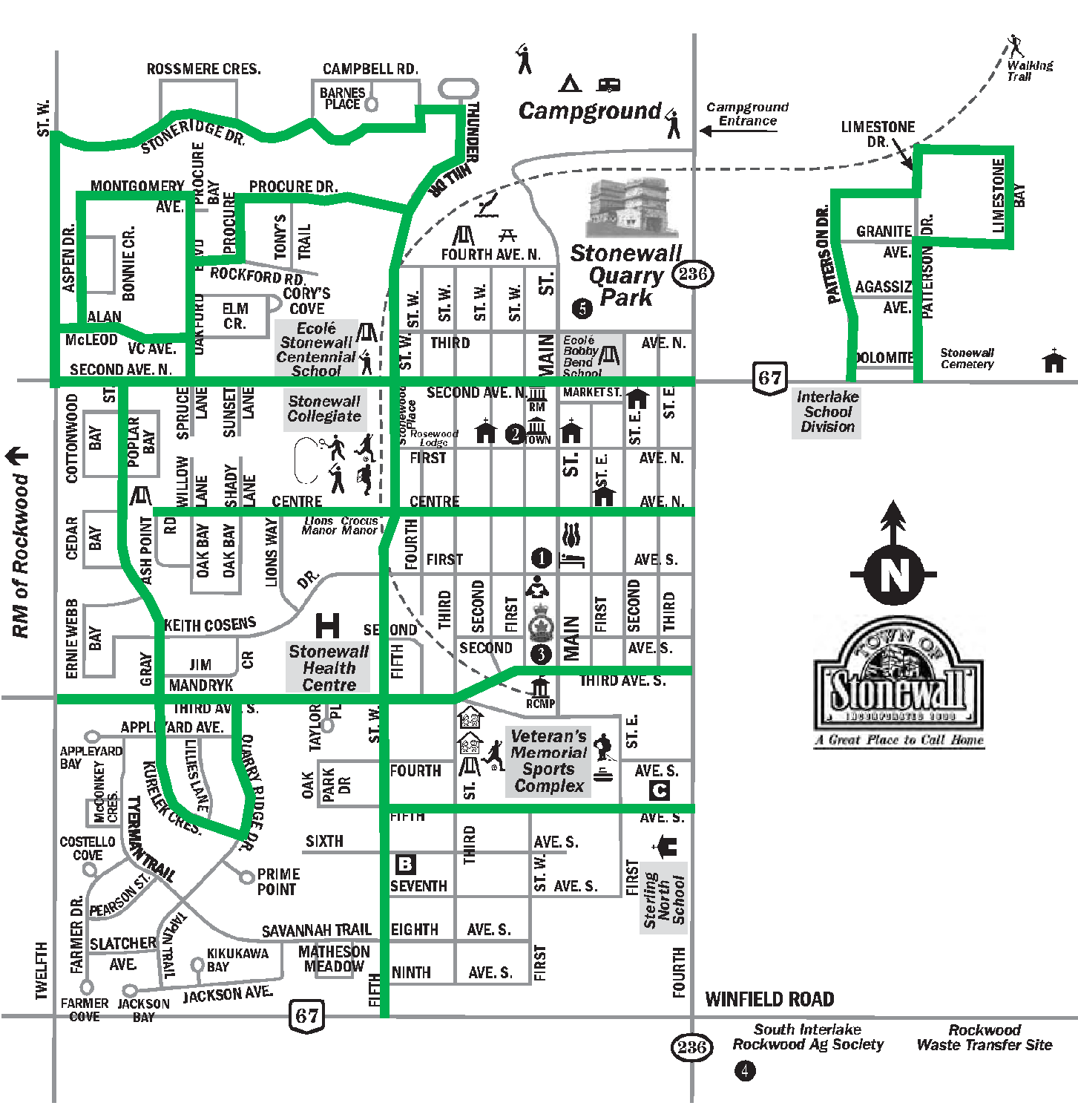 Major Sidewalks for the following streets are generally cleared during the same time period the Major Roadways are being cleared:

Main Street and the Main Street sidewalks are to be cleared and snow removed within 24 hours of the end of a major snow event.  The clearing and removal of snow will occur after business hours.

Parking lots of the Town Facilities (Water Treatment Plant, Lift Stations, Town Hall, VMSC/Arena and Quarry Park) as well as the Library are cleared of snow after the Major Roadways are finished being cleared.  Remaining roadways in the Business/Industrial Park will also be cleared at this time.

Snow clearing for the entire Town will commence using the zones identified in Appendix B.  Areas will rotate based on the last snowfall. Garbage days will dictate the priority of plowing as waste placed at the end of driveways will impede plowing.  During the clearing of the Residential streets the remainder of the sidewalks, walkways, and swalks are then cleared of snow.

At the discretion of the Town, snow will be hauled from Town parking lots, intersections, boulevards, and other areas where snow piles provide no additional room for further snow clearing or may cause a dangerous (visibility) problem.