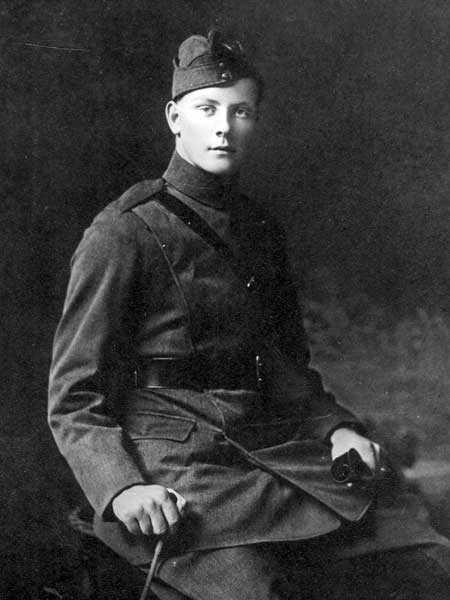 The British Commonwealth’s highest and most prestigious award for bravery in the face of the enemy is the Victoria Cross. The youngest of the 90 Canadians to earn this honor was Alan Arnett McLeod. Alan earned his award on March 27, 1918.  He was 18 years old.
Alan was born in Stonewall on April 20, 1899.  He showed an early affinity for the military and in 1913, although 4 years under age, he joined the 34th Fort Garry Horse for summer training.  When World War I started Alan was only 15. He tried to enlist several times and was rejected each time because he was underage. Finally in 1917, just days after his 18th birthday he entered the Royal Flying Corps in Toronto. By August, he was sent overseas to England.  By the end of the year, he was flying missions over France.
On March 27, 1918 Alan & his gunner, Lt. Hammond, were on a mission when they were attacked by 8 German triplanes.  During the ensuing gunfight, both McLeod and Hammond were wounded several times. A bullet stuck their gas tank and their plane caught fire. McLeod climbed out on the wing and continued to fly the plane while Hammond continued to fire at the enemy planes. They managed to shoot down three enemy planes before they crashed in "No Man’s Land” between the front lines.  Alan McLeod was wounded again as he dragged Hammond to safety.
Alan and his father traveled to Buckingham Palace on September 4, 1918 where he was presented with his medal.  They returned to Manitoba at the end of September. Alan caught influenza while recovering from his wounds. He died November 6, 1918.