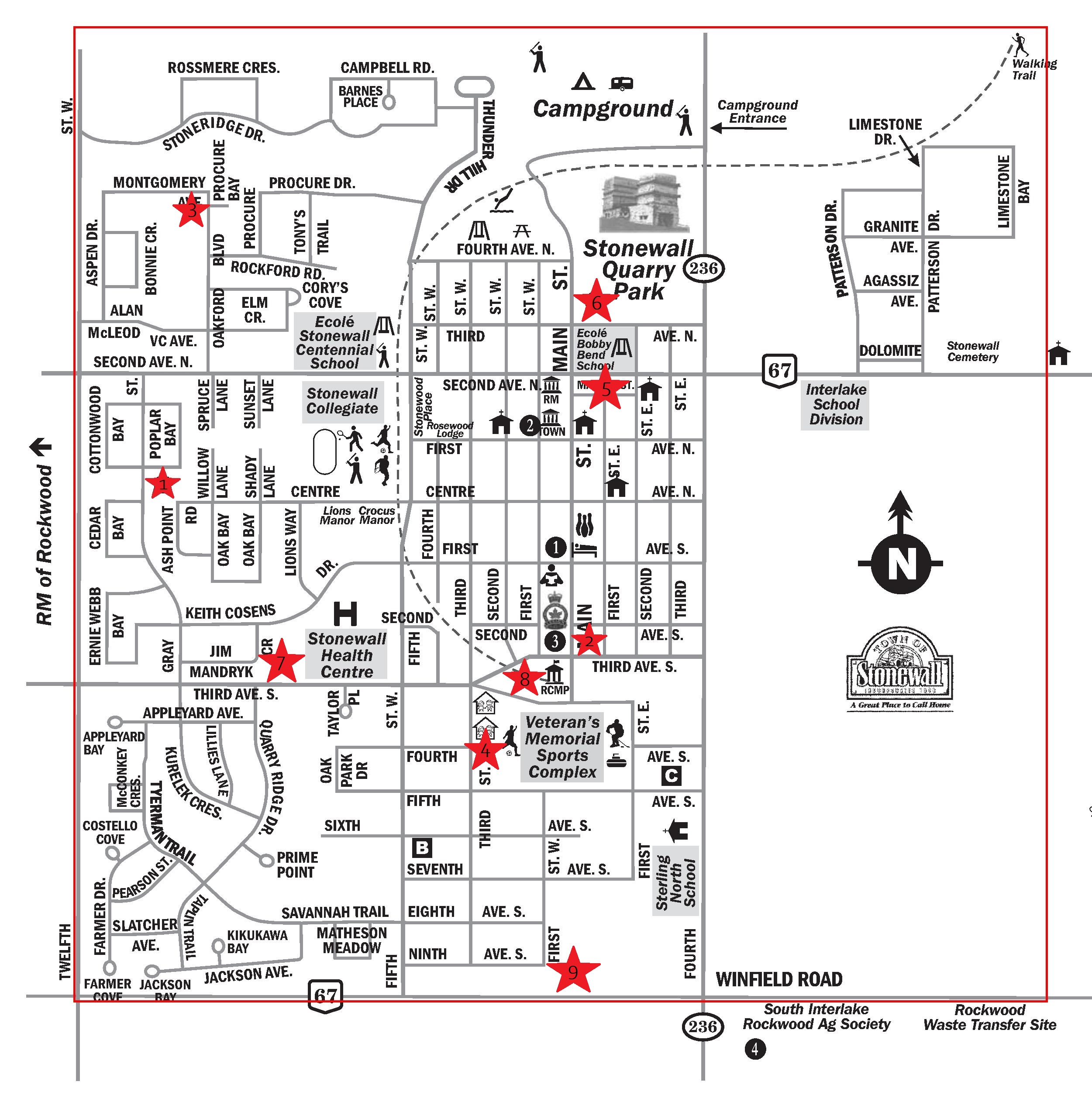 Located at the west end of Centre Avenue you will find Archie Gary Park and one of the playgrounds within the Town of Stonewall.

Archie Bruce Gray came to Stonewall in 1944 and was Interlake Regional Manager for Western Savings and Loan for 20 years. He then farmed and raised specialty crops for the Department of Agriculture on land now known as Rockwall Estates. The park in the development, Archie Gray Park, was named after him. He was the original developer of the Rockwell Estates.

At the corner of Main Street and 3rd Avenue S you will find Centennial Park. 2008 marked the 100th year of incorporation for the Town of Stonewall and Centennial Park was commemorated at that time.

Centennial Park features a mini kiln and time capsule in honour of the Centennial anniversary. Other features include a paved walking path, benches and flower garden.

Located between 39 Oakford Blvd. and 45 Montgomery Avenue you will find Dave Lethbridge Park. Known for it's paved walking trails and a great place to do some bird watching.

The park was unveiled on August 8, 2016 during a dedication ceremony in former Mayor Lethbridge's honour. Dave Lethbridge served as a councillor for the Town of Stonewall for 6 years from November 1980 to October 1986. In October, 1986 Dave Lethbridge was elected Mayor and served until October, 2022.  Lethbridge was involved in the creation of the town's hospital, library, arena, and curling club, as well as the development of Quarry Park.

Helen Montgomery was born in Stonewall in 1908. Her father was Weston Montgomery, Stonewall's first mayor. After graduating from high school here, she attended the University of Manitoba (Bachelor of Science), the University of Minnesota (post grad work in Dietetics), and Winnipeg General Hospital (Hospital Dietetics). She returned to Stonewall in 1937 and took a job in the RM of Rockwood office where she worked for 37 years. Helen was affectionately know as Auntie Helen in the community. Helen died in 1994.

The monument is made of Tyndall stone, resting on a base of re-inforced concrete and local limestone. The monument is surrounded by a terrace with steps mounting on opposite sides. A stone urn finishes the top. On four sides are four bronze tablets bearing the 102 names. Lower on each side a lion's head forms an outlet for the fountain, further down are four basins for receiving the flow of water.

At the north end of Main Street you will find Stonewall Quarry Park.  Quarry Park provides picnic facilities and walking trails for visitors and residents alike.

The Town of Stonewall came into being as an industrial town - with a multinational workforce of men who toiled twelve hours a day, seven days a week in the limestone quarries.

For decades limestone was quarried and processed into quicklime. The quarries are closed now and the abandoned kilns stand at the north end of Main Street, as a silent reminder of the past and the men whose labour helped shape the community.

The Town of Stonewall has developed the area around the kilns into a park.  Today Quarry Park covers about 80 acres. It includes a campground, man-made lake, splash pad, play ground, baseball diamonds, walking trails, and the Quarry Park Heritage Arts Centre.

The Quarry also displays the many aspects of limestone production. The history of the site is documented in interpretive signage.

Located on 3rd Avenue S just west of the Stonewall Hospital you will find Ruby Roe Tall Grass Prairie, a remnant of the tall grass prairie ecosystem in Manitoba.

Named after Ruby Roe, who after retirement settled in Stonewall, Manitoba in 1988 and embarked on her second career, that of community builder and volunteer. She helped initiate REACT, an environmental organization, which started in 1991. REACT took on a range of projects, from recycling to preserving a patch of tallgrass prairie in the Town of Stonewall. Ruby Roe's hard work and determination helped to make it happen and in her honour, in fall 2008, the Town named the prairie the Ruby Roe Tallgrass Prairie. Located on the south side of 3rd Avenue South, jest west of the RCMP Detachment, the Stonewall Community Memory Garden serves as a memory garden for loved ones who once resided in the community and have since passed away.
The garden features memory stones which make up a walking path along with benches for sitting.

The Off-Leash Dog Park officially opened on September 10, 2020.  The park is named after Ross Thompson who served as mayor of the Town of Stonewall from 2002 - 2014.